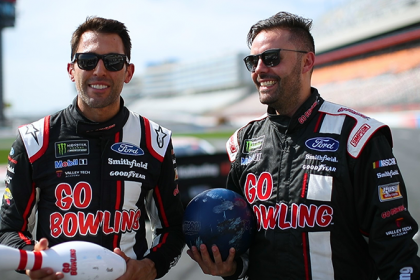 ARLINGTON, Texas – Jason Belmonte, the world’s No. 1 bowler and four-time Professional Bowlers Association Player of the Year known for his powerful two-handed style, teamed with NASCAR star Aric Almirola to unleash the fastest strike in the sport of bowling.
With Almirola driving Stewart-Haas Racing’s No. 10 Go Bowling! Ford Mustang, Belmonte took aim at the 10 pins that were set on Charlotte Motor Speedway’s start/finish line and delivered what can only be described as a thunderous strike.
“That was easily one of the most fantastic strikes I have delivered in my bowling career,” said Belmonte, who used a specially designed Storm bowling ball to blast the pins. “I’ve had the chance to ride with Aric before and I put my total trust in his ability to get me perfectly lined up for the shot.”
Almirola said delivering a strike while going 140 miles per hour is not exactly easy without the right equipment.
“If you need a strike, it helps to have one of the all-time great bowlers in the seat next to you,” Almirola said. “I know Jason is a two-hander, but I think the No. 10 Go Bowling! Ford probably generates a little more power. It was a great challenge, and I can’t tell you how much fun it was to team up for that strike.”
Almirola is in his second year with Stewart-Haas Racing and eighth year competing in the Monster Energy NASCAR Cup Series. He met Belmonte at the Go Bowling! at The Glen race at Watkins Glen International in 2018. Belmonte served as the PBA ambassador at the race.
The two met again in early 2019, joining forces for the CP3 PBA Celebrity Invitational presented by Go Bowling! in January. At the celebrity tournament, Belmonte brought up the idea of attempting the world’s fastest strike.
With GoBowling.com, Smithfield, the primary sponsor of the No. 10 Ford Mustang for Stewart-Hass Racing, and Storm Bowling, the bowling ball company that sponsors Belmonte, the wheels were put in motion.
Stewart-Haas Racing provided the specially wrapped and outfitted No. 10 Go Bowling! Ford Mustang to safely accommodate Belmonte for the attempt.

Storm produced 12 “Pro Motion” rock-solid bowling balls to withstand the 140-mph launch from the racecar and Go Bowling! provided the branded pins for the attempt on the Charlotte Motor Speedway Roval Course, which will host the Sept. 29 Bank of America ROVAL 400 on Sept. 29.
“GoBowling.com was excited to team with Aric, Jason, Stewart-Haas Racing and Storm Bowling on this amazing feat,” said John Harbuck, president of Strike Ten Entertainment, the marketing arm of the bowling industry. “Our partnerships in the racing world have been very effective as we seek to put bowling in front of consumers. I’m certain the video of the world’s fastest strike will give us even further reach.”
The parties met Sept. 4 at Charlotte Motor Speedway to attempt at the world’s fastest strike.
The pins were set up at the start/finish line and the No. 10 Go Bowling! Ford Mustang started its run halfway around the road course to get enough speed for the attempt.
While the first few attempts were a little off-target, Belmonte showed he can read any lane condition – even a road course lane – and struck on the fifth attempt from his passenger seat.
The nationwide premiere of the Go Bowling! World’s Fastest Strike video is set for Thursday, Sept. 19 at 8 p.m. (Eastern). Go to GoBowlingWorldsFastestStrike.com to watch the video.
GoBowling.com is the ultimate source for consumers as fans can find local bowling centers, take advantage of promotional offers, watch bowling video tips, and more.

About GoBowling.com
GoBowling.com is the destination for bowling fans and enthusiasts seeking news and information about one of America’s favorite pastimes and the nation’s number one participatory sport. With more than 67 million people taking to the lanes every year, GoBowling.com is a one-stop location where people of all ages can go to satisfy their love of bowling. Consumers turn to GoBowling.com every day to find bowling fun – discovering new bowling centers and tips to use on the lanes, event news and great deals at more than 1,700+ family-friendly bowling centers across the country.