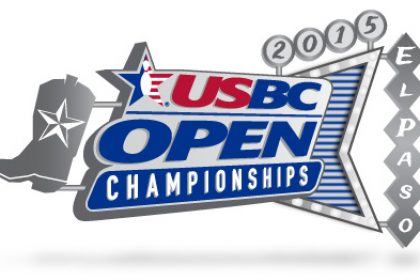 United States Bowling Congress Hall of Famer Bill Lillard Sr. (pictured left) of Houston added to his USBC Open Championships legacy as he became the tournament’s career pinfall leader during his first game of singles in front of a standing-room-only crowd of friends, family, fans and fellow competitors at the El Paso Convention Center on March 31.

He needed 106 pins in singles to secure the record and got there in style with a strike in the eighth frame.

His wife, Dorothy (right), was in the audience, as she has been for more than 60 years, and USBC Executive Director Chad Murphy, USBC national board member Karl Kielich and Open Championships Tournament Manager Duane Hagen were on-hand to present Lillard with a special trophy commemorating the achievement.

Norris took part in a record-tying 71 appearances, with his last coming at the 2000 event in Albuquerque, New Mexico, a year before Lillard became a member of the elite 100,000-Pin Club, which currently has 15 members.

“I had been telling Joe since I had about 85,000 pins that I needed him to slow down, so I could catch him, only joking of course,” said Lillard, who averaged more than 200 throughout most of his tournament career.

“We saw his last three shots at his last tournament in Albuquerque, and they all were strikes, of course. He was a terrific bowler, and his record has lasted a long time. I’m very proud and excited to be able to reach that number, but records are made to be broken. I know there are some great bowlers who have a really good chance to catch me soon, too.”

An eight-time Open Championships winner, and the first of three bowlers in tournament history to claim four titles in the same year, Lillard now has settled atop the career pinfall list with a 124,087 total.

Slightly hampered by a slow recovery from a recent knee replacement, Lillard has been using an abbreviated approach and worked his way up to using a 12-pound ball in El Paso this week, but that did not stop him from completing all nine games.